Dr. Geeta S. Iyengar or Geetaji as many people lovingly call her is no more…she passed away on December 16th 2018 in a peaceful manner in her sleep. The community of Yoga and fraternity of Iyengar Yoga clan knows how terrible is the loss in the school of Yoga and in the life of practitioners who used to regularly visit her at RIMYI, Pune. After Guruji’s demise the light of Yoga and Workshops and classes were a regular feature at RIMYI, Pune conducted by Geetaji herself. She was over 74 years and was fighting with few conditions of her health and wellbeing but that didn’t stop her from taking classes…she used to give verbal commands/instructions and demonstrations used to be done by senior teachers. She was called a fighter, a hero and a great lover of teaching yoga. But what was the most striking part of her personality didn’t come to light till the last breath that she breathed I think…She was a true Yogi who actually had an “icchamrityu” or “Svecchamrityu”

Sve(self) + iccha (will) + mrityu (death)} is an adjective which means – having death at one’s own power or dying at one’s own will…It is also called Iccha-mrityu meaning self-willed death but it is not to be confused with self-inflicted death. In the ancient text, Mahabharata we have a reference of Icchamrityu…a boon granted by King Shantanu to his son Gangaputra (son of goddess river Ganga) Devavrata, also known as Bhishma, (the great warrior) who chose the time and manner of his own death. Bhishma promised his father to remain Brahmacharya (celibate) till his last breath to allow the progeny of his step mother to become future kings. He devoted his whole life in protecting 3 generations of kings. During the great Kurukshetra war, despite being shot by 100s of arrows, he lay on a bed of arrows for 58 nights and chose the time of departure on the first day of Uttarayana (winter solstice).

I see a similarity between Geetaji and Bhishmas penance. Like Bhishma, she renounced a marital family life and devoted herself to her fathers vision of studying, teaching and preaching yoga to the world. Like Bhishma who lay on a bed of arrows for 58 days to see the end of the war, Gitaji moved in a wheelchair for months watching, overseeing, taking marathon classes to successfully complete the grand centenary celebrations of her father and decided to part this mortal body at the time of her choosing. But what else can we call this if not Icchamrityu Mrityu. How Bhishma stated in the middle of the war that Arjuna’s arrows are more comfortable than the pillows in the palace, Gitaji time and again said that she has no pain, no worries in her wheelchair as long as she is in the middle of the action, the event, the celebrations, the grand finale of her mega class at Balewadi stadium Pune in the middle of thousands of yoga practitioners. It was no less than a battleground with warriors not fighting against each other other but defeating the ego and establishing the soul above self.

The Svadhishthana chakra is the Abode of the Tattva Apas; one conquers death with the awakening of this chakra. As one of the twenty-six siddhis that form part of Kundalini yoga, Iccha-mrityu siddhi gives the yogi the power to die at will. 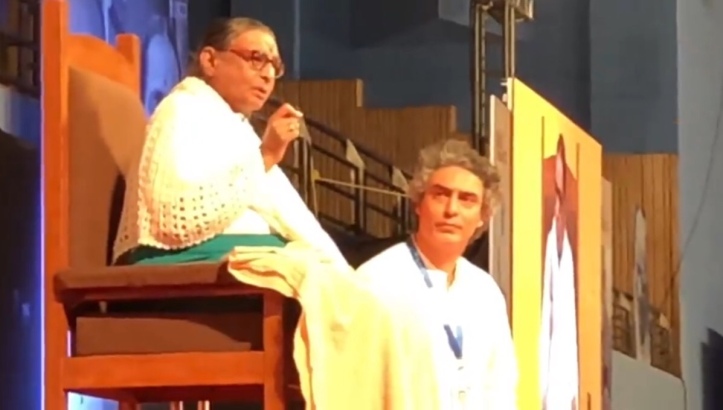 Geetaji passed away exactly a day after Guruji’s (B.K.S. Iyengar) centenary celebration which was a mega event of the year for celebrating our beloved Guruji’s 100th birth anniversary and was planned from December 3rd to 14th, 2018. Students, teachers, practitioners from all around the world sent their applications for this experience of Marathon of Yoga classes with Iyengars at Balewadi Sports Stadium, Pune amidst thousands of senior practitioners and teachers. The highlight of the show was Geetaji’s epic classes addressing thousands of dedicated midlevel and senior level practitioners, teachers from all around the world and she was there holding the fort and delivered lectures and conducted classes till the last day. And then within a day after the event, she called it a day…a lifetime of epic learnings, teachings, preachings dedicated to students, practitioners in the field of Yoga…all came to an end. The era ended but it was not abrupt, not sudden, not surprised but more like a planned, decided and solemn event. She decided to end…with her calling she brought an end to her earthly life after finishing with her duties, responsibilities and her wishes of witnessing Guruji’s centennial celebration. I still recall the year 2017…Guruji’s 99th year of birth anniversary celebration in Pune…Geetaji at her best form…all verbal commands for hours together effortlessly, graciously continuing with her classes…and the only time she took a break was when she coughed…seeing her cough and visible physical weakness we kept thinking that she will take a break and may not take the next day’s class…but nothing of that sort happened and she continued classes without a break for 10 days…nonstop…One day she said…you all think that time has come for me to say goodbye! Not really! I will see the Centennial year celebration of our beloved Guruji’s and then breathe my last…these words and the statement of Geetaji’s still ring in my ears…did she mean that life will listen to her wishes of when to rise and become one with the universe! Her Icchamrityu left a mark in the minds of us all and opened yet another window for us to think and behold what a divine Yogi and a practitioner she was….It teaches us that a Yogi knows that this earthly life is not her true abode and she is only a visitor/ a tourist, she has to go back to her real abode and be one with the supreme light but this trip to this earth is not an unplanned one for them…they decide on the date of their return…Icchamrityu…as you may call it.